What we learned about air pollution in Lambeth 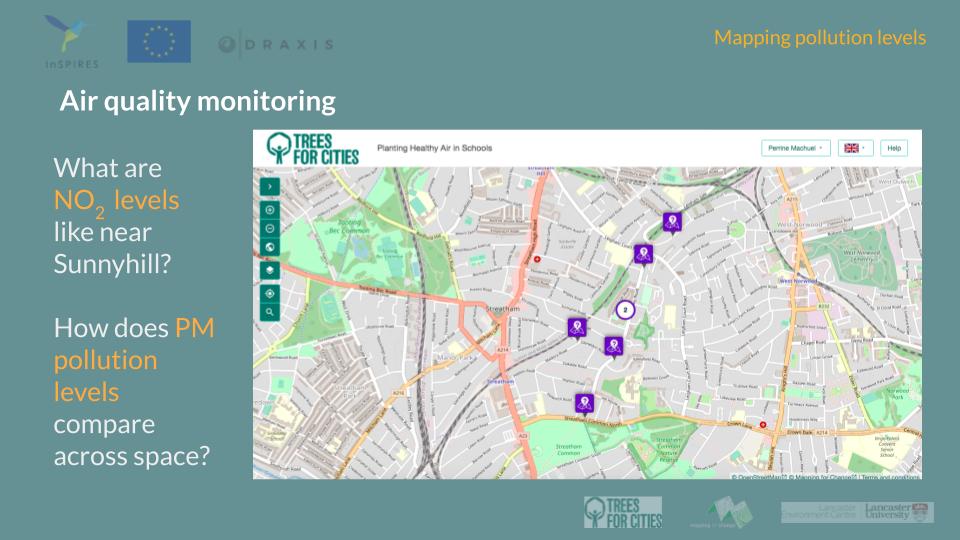 Pollution concentrations are shown to skyrocket, the bigger the road or the traffic intersection. In terms of exposure and health impact for vulnerable demographics (such as children), what happens when a school is located near busy road networks? Unsurprisingly, this is often the case in dense urban areas and London is no exception.

Mapping for Change partnered with Draxis, as part of the InSPIRES project, to facilitate a citizen science air quality monitoring project at a primary school in Lambeth from October 2020 to February 2021. The idea was to obtain a better understanding of the children’s exposure to pollution in and en route to school. Sunny Hill primary school is located nearby major roads prone to intense traffic at various hours of the day. We worked with parents and pupils, using both low-cost sensors to measure particulate matter (PM10 and PM2.5) and diffusion tubes to measure nitrogen dioxide. A few interesting, and perhaps surprising trends emerged from the monitoring…

Unsurprisingly, parents found higher levels of nitrogen dioxide pollution along the major road passing by the school. Consistent with current scientific evidence about air pollution dispersion, pollution levels sharply dropped in back streets and around green areas, which parents found to be true around the neighbourhood.

However, we were all taken aback when we noticed that particulate matter levels substantially rose in the wake of London’s Bonfire night. Parents had placed their sensor within their homes, and pupils in classrooms, and yet all sensors picked up the increased pollution concentrations. On the bright side of things, the school consistently displayed the lowest pollution levels throughout the monitoring period. We found the particulate concentrations to be well below EU and WHO guidelines.

This trend, however, is not true of all parents’ homes, where sensors picked up higher levels of particulate matter. We could notice a substantial difference in pollution levels between the front and back of parents’ homes, particularly for those located near a major road or – and this insight sparked a lot of interest – those located near the school. In fact, the monitoring provided evidence which backed up a growing concern: car idling seems to effectively contribute to higher pollution levels around the school. Parents’ homes located right in front of the school noticed higher levels of pollution at pick up and drop off times.

Along our monitoring journey, we had the pleasure to meet with Mums for Lungs, Idling Action London and Lambeth Council to try to bring ideas forward to make use of the evidence collected. Mums for Lungs and Idling Action London are London based charities campaigning in different ways to bring about better air quality in the city. Mums for Lungs are the initiators of the ‘School Streets’ campaign, calling for school road closure around drop-off and pick-up times to minimise children’s exposure. Idling Action London overseas several anti-idling campaigns across the city, and offer school interventions as well as campaign material for citizens to launch their own campaign. We all had a great chat with these stakeholders, which opened up opportunities to act upon air pollution around the school.

See you all soon!

The work undertaken with the school pupils will be featured in a school festival later in the year. This will be an opportunity to disseminate our visuals and share ideas among pupils and school staff as to how to improve the situation. The Eco-warriors, with whom we worked and who were highly educated on air pollution and its impact, will carry on gathering evidence about pollution levels with the Planting Healthy Air in Schools programme, which Mapping for Change is leading with Trees for Cities.